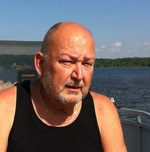 William J. "Bill" Roberts Jr, 70, of Indianapolis, passed away peacefully on Sunday, March 15th, 2020 with family by his side. He was born January 27th, 1950 in Detroit, Michigan to parents William Sr. and Harriett (Colbey) Roberts. He married Carolyn J. (Jaworski) Roberts on October 21st, 1978. He lived in Detroit, Michigan for 48 years and was a resident of Indianapolis since 1994.

Bill is survived by his wife, Carolyn J. (Jaworski) Roberts of Indianapolis of nearly 42 years; one daughter, Rachel Roberts; a son in law Leo Hefferan; three grandchildren, Tru Marie Corey, Chloie Joyce Corey, and Zachary D. Roberts; one niece, Drusillia Hatchew, and one nephew, George Ranous Jr. Bill is preceded in death by both of his parents, and two sisters, Harriett Kelley and Drusillia E. Ranous.

Bill was a 1968 graduate of Henry Ford High School in Michigan and later went onto college. He was a Truck Driver for Nice Pak Inc in Mooresville for 10 years and retired in 2016. He enjoyed birds, watching and feeding them. Bill also loved to garden and go fishing. He loved spending time with his family.

Cremation arrangements are being handled by Jones Family Mortuary in Mooresville. A memorial service will be held at a later date.

Memorial contributions may be made to a Humane Society of your choice.

To send a condolence to the family or to share a story about Bill, please visit: www.jonesfamilymortuary.com