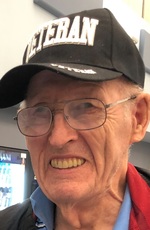 Wayne Thomas Horton, 86, formerly of West Newton, passed away Thursday, October 3, 2019 with family by his side. He was born in West Newton to Laurence and Amy (Nichols) Horton on May 19, 1933. He married Sharon (Roberts) Horton on Veteran's Day in 1967, and after her death he was remarried to Judy (Smith) Horton in 1984.

Wayne was a 1951 graduate of Decatur Central High School. Wayne was a Korean War Veteran while serving in the Navy. He worked for FMC- Rexnord for 42 years and retired in 1997 from the shipping department. He was a member of West Newton United Methodist Church and was on the West Newton Cemetery board of directors. He loved to play card games and spend time with family. Wayne enjoyed all sports and gospel music.

In lieu of flowers, memorial contributions may be made to a veterans organization of your choice.

To send a condolence or share a story about Wayne, please visit: www.jonesfamilymortuary.com