To share your memory on the wall of Todd Finley, sign in using one of the following options:

Todd most recently worked for Carrier UTC in Indianapolis as a Precision Inspector for 16 years. He traveled around while serving in the Army during Desert Storm, before settling down in Mooresville in 1998. Todd was an avid sports fan, especially football. His favorite teams were the San Diego Chargers, Los Angeles Lakers and San Diego Padres. He enjoyed cooking along with teaching all of his kids how to cook.

To send a condolence or to share a story about Todd, please visit: www.jonesfamilymortuary.com
Read Less

To send flowers to the family or plant a tree in memory of Todd Stephen Finley, please visit our Heartfelt Sympathies Store.

Receive notifications about information and event scheduling for Todd

We encourage you to share your most beloved memories of Todd here, so that the family and other loved ones can always see it. You can upload cherished photographs, or share your favorite stories, and can even comment on those shared by others.

Mark Burry, Peyton Baker & Michelle Aleksa, and other have sent flowers to the family of Todd Stephen Finley.
Show you care by sending flowers

Your Friends at SCS

Posted Jun 22, 2020 at 12:20pm
Please accept our most heartfelt sympathies for your loss... Our thoughts are with you and your family during this difficult time.

Your Friends at SCS purchased the Medium Dish Garden for the family of Todd Finley. Send Flowers

Posted Jun 22, 2020 at 08:54am
Todd will be missed,he was always a good person and good friend to me , a person of high values, God Bless his family, Stay strong in faith

Posted Jun 19, 2020 at 06:37pm
To Christina and children, please accept my condolences for the loss of your husband and father. He was an awesome friend, co-worker and a great guy! It saddens me to know that I will never talk to or see him again. I send prayers up, to give you and your family the strength to make it through this difficult time. I can hear him call out to me "Hey, Girl how you been!" I'd say "Todd you do know my name is Brigitt right?" He'd just say "Yeah, I know!" Then we'd laugh and I'd reply "Only for you Todd only for you!" R.I.H. MY FRIEND you will be missed!
Comment Share
Share via:
T

We lived next door to all of you on South Street, plus he was my son's first football coach. Good man who loved his family, gone too soon. Prayers for all of you. 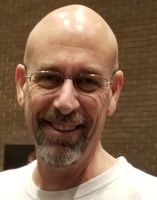