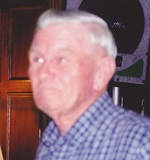 Bob previously served in the Air Force during the Korean war and later became a self employed Carpenter for over 50 years. The last few years he worked for Spivey Construction. He was a past member of the American Legion in Indianapolis. Bob was a hard working man and enjoyed playing cards especially poker. He was a family man.

To send a condolence to the family or to share a story about Bob, please visit: www.jonesfamilymortuary.com