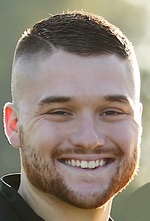 Richard "Ricky" Lee Francis II, 26, of Mooresville, passed away on February 3, 2019. Ricky was born August 14, 1992 in Indianapolis. Ricky is the son of Richard "Rick" Francis and Laura Ann (Payton) Francis. Ricky married his wife, Lisa (Clunie) Francis, on June 9, 2018. Ricky graduated from Mooresville High School in 2011 and earned his Bachelor's Degree from Purdue in 2015 where he was also commissioned from the ROTC Program.

Ricky is survived by his loving wife, Lisa Francis, of Mooresville, and loving family: Rick (father) and Laura (mother) Francis, Landon Francis (brother) and Payton Francis (brother) of Camby, and Sonny Payton (maternal grandfather) of Martinsville; in-laws, Larry and Luanne Clunie of Clayton; a brother-in-law, Teddy Clunie of Lebanon, and loved by many aunts, uncles and cousins. He is preceded in death by his paternal grandparents, Mylo and Shirley Francis.

Ricky was an Assessment Worker for the Morgan County Department of Child Services and a 1st Lieutenant and Executive Officer of Alpha Company, 1st Battalion 151st Regiment Indiana National Guard in Linton, IN. He lived in Mooresville his whole life. Ricky loved playing, watching, and coaching baseball. He dedicated many summers to the Mooresville Little League baseball fields. Baseball season was his favorite time of the year. He was a Phillies fan. Ricky was a big Purdue fan. He loved watching and attending Purdue football and basketball games. Ricky was a one of a kind husband, son, brother, and friend.

To send a condolence to the family or share a story about Ricky, please visit: www.jonesfamilymortuary.com