To share your memory on the wall of Randal Cox, sign in using one of the following options:

Provide comfort for the family of Randal Cox with a meaningful gesture of sympathy.

Randal attended Otwell High School and later graduated from George Washington High School in Indianapolis. He also served in the Navy during World War II and later went on to attend Purdue Extension. He was a Lay Out Inspector for Chrysler for 23 years before retiring in 1988. He was a member of Camby Community Church. Randal was also a member of the Mooresville VFW Post #111. He enjoyed gardening, working in the yard and around the house. Randal loved spending time with his family.

To send a condolence to the family or to share a story about Randal, please visit: www.jonesfamilymortuary.com
Read Less

Receive notifications about information and event scheduling for Randal

We encourage you to share your most beloved memories of Randal here, so that the family and other loved ones can always see it. You can upload cherished photographs, or share your favorite stories, and can even comment on those shared by others.

Posted May 26, 2020 at 10:51am
ON BEHALF OF THE COMRADES AND SISTERS OF THE DEPARTMENT OF INDIANA YOU HAVE OUR DEEPEST CONDOLENCES FOR THE LOSS OF YOUR LOVED ONE AND OUR DEPARTED COMRADE.OUR PRAYERS ARE WITH YOU ALL.SINCERELY VETERANS OF FOREIGN WARS OF THE UNITED STATES DEPARTMENT OF INDIANA STATE CHAPLAIN KEISTON R.HOLLOWAY
Comment Share
Share via:
SG

Posted May 26, 2020 at 10:16am
Randal was a wonderful kind man. I have so many fond memories of his loving smile at church and the quiet way of leadership by example that he exemplified. Condolences and love to all your family.
Comment Share
Share via:
GB

Posted May 26, 2020 at 08:38am
Sheila, Dan and family; With deepest sympathy.Project Design and Management: Gerry, Brad, Joe, Mark, Rob and Steve

Gerry Bollman purchased the Large Basket Garden for the family of Randal Cox.

Posted May 24, 2020 at 05:35pm
I am so sorry for your deep loss. I have lovely memories of Randal, Violet, Sheila and Elaine at Camby Community Church and also visiting at their home. Randal was always a pillar of gentle kindness, like his entire family. Sending prayers. 😇🌺🌹💖
Comment Share
Share via:
SG

Thank you so much Cindy. We did enjoy the times with your family!
BC 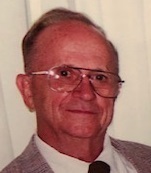