To share your memory on the wall of Paul Holbrook, sign in using one of the following options:

Paul is survived by his son, Hans (Leslie) Holbrook of Camby; his father, Don Holbrook; two grand children, Cash and Carly Holbrook; one sister, Connie (Scott) Andis; and several nieces and nephews. Paul is preceded in death by his mother Della (Taylor) Holbrook.

Paul was a 1977 graduate of Martinsville High School. He was the past President and current Engineering Manager for Twigg Aerospace Component in Martinsville for 42 years. He was a member of the Martinsville Masonic Lodge #74. Paul was a loving, determined and hardworking man that enjoyed playing drums. He was an avid Ohio State football fan but also enjoyed cars, music and his family.

To send a condolence to the family or to share a story about Paul, please visit: www.jonesfamilymortuary.com
Read Less

To send flowers to the family or plant a tree in memory of Paul D Holbrook, please visit our Heartfelt Sympathies Store.

Receive notifications about information and event scheduling for Paul

We encourage you to share your most beloved memories of Paul here, so that the family and other loved ones can always see it. You can upload cherished photographs, or share your favorite stories, and can even comment on those shared by others.

Posted Dec 16, 2019 at 02:36pm
I worked with Paul at Twigg Corporation for 3 years. He was my manager. He and I shared a love of classic rock. Paul and I were both strong personalities, and although sometimes we 'butted heads', we also worked well together. I was older than him by about 9 years, but he had more maturity than me. He and I talked frequently about going and having a beer after work, but we never did so...we both were eager to get off and get home to our families. Paul gave a lot of himself to his career (maybe too much), but he had commitment and perseverance. He had a good heart. I regret that we never had that beer together. - Joe Brock
Comment Share
Share via:
HS

Flowers were purchased for the family of Paul Holbrook. Send Flowers

Posted Dec 12, 2019 at 07:14pm
Will be forever missed. With much love, Cindy Brighton Sichting and Family

Flowers were purchased for the family of Paul Holbrook. Send Flowers

Posted Dec 12, 2019 at 07:07pm
My Prayers go out to His Family , Went to school with Paul was in band together, he was a great friend, always had a big smile , lots of great memories, may God hold his family close to his heart and give them comfort during this difficult time 🌺
Comment Share
Share via:
TF 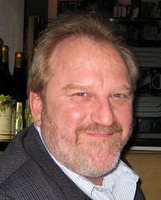