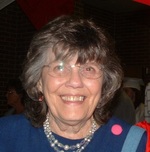 Mary Martha (Turpin) Brickley-McCoun, 90, of Plainfield, Indiana passed away Wednesday, September 30th, 2020. She was born November 20th, 1929 in Beech Grove to her parents, Carl and Martha (Armstrong) Turpin. She married the late Robert E. Brickley on June 15th, 1952 and later married the late Dan E. McCoun Sr. on June 9th, 1978. Mary was a resident of Indianapolis for most of her life.

To send a condolence to the family or to share a story about Mary, please visit: www.jonesfamilymortuary.com