To share your memory on the wall of Mary Brickley-McCoun, sign in using one of the following options:

To send a condolence to the family or to share a story about Mary, please visit: www.jonesfamilymortuary.com
Read Less

To send flowers to the family or plant a tree in memory of Mary Martha Brickley-McCoun (Turpin), please visit our Heartfelt Sympathies Store.

Receive notifications about information and event scheduling for Mary

We encourage you to share your most beloved memories of Mary here, so that the family and other loved ones can always see it. You can upload cherished photographs, or share your favorite stories, and can even comment on those shared by others.

Posted Oct 06, 2020 at 10:39am
Marty recently remembered some of the adventures she had when she was a little girl. Growing up in Woodruff place in Indianapolis, she usually played with a neighbor boy. Marty fondly remembered swinging across the alley on a rope. Before school-age, she followed all the neighbor little-ones to class, then had to be returned home when she repeatedly peered through the windows to see what was taking place. She wanted to be in there! They said she couldn’t do that, it was too distracting to the class. When older, Marty attended Indianapolis Public School 33. When the school had a contest to see which class could sell the most school cookies, her class won. However, she got a young boy in trouble for selling a large amount of cookies for her. He wasn’t in trouble with the school, but with the students in his class because he was not in the same class as Marty.
Marty eventually taught at that same school 33 that she had attended. She made learning memorable by making games and using re-enacting to engage her students. Her sons helped build and wire electric multiple-choice boards such as are usually seen in museums.
When she retired, Marty put her energy into music. A Daughters Of The American Revolution member, Hattie, helped her learn how to play the Lap Dulcimer. With Jan and Richard Halladay’s group, The Brown County Dulcimer Society and her own Forget-Me-Nots, they exported the exuberance for the old songs all over mid and southern Indiana.
To sing “There’s A Hole In The Bucket Dear Liza” with Marty was a bit intimidating because she acted out the part of Liza. Liza was perturbed. It was such a funny routine that, when performed on a weekday for a sewing group at the Gray Road Baptist Church, a lady in the audience declared something you wouldn’t think you’d hear in a church building, “I’ve never heard that before. It was so hilarious, I nearly peed my pants!”
I will sorely miss Marty’s spiritedness in all she did. There is a Marty-shaped empty space in the world now, BUT the music and verve she spread all around will surely continue in all of us.

Posted Oct 05, 2020 at 06:52pm
May her family be comforted by the memory of Mary. From her fellow musicians, we are singing a song for her.

Blooming Garden Basket was purchased and planted a memorial tree for the family of Mary Brickley-McCoun. Send Flowers

Bill Burton purchased the Blooming Garden Basket and planted a memorial tree for the family of Mary Brickley-McCoun. Send Flowers 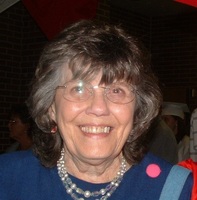