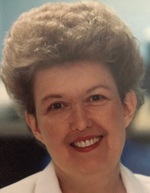 Mary Ann Kellum Cottrell passed away on Sunday, March 24, 2019 in health care at Timbercrest Senior Living Community, North Manchester. Her husband and two children were with her.