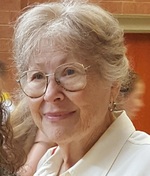 Marsha Anne (Tanner) Marshall, 79, of Indianapolis, went to be with the lord on Tuesday, June 9th, 2020. She was born September 28th, 1940 in Indianapolis to her parents, John Albert and Lois Melodean (Reynolds) Tanner. She married Clyde Ted Marshall on December 31st, 1991. She was a resident of Indianapolis for most of her life.

Marsha is survived by her two children: William Todd (Michele) DeMichieli of Creve Coeur, Missouri and Laura (Scott) DeMichieli- Benko of Martinsville; four grandchildren: Aaron Benko of Mooresville, Sarah Benko of Martinsville, Abigail and Samantha DeMichieli of Creve Coeur, Missouri; and one brother, Joseph Tanner of Commiskey, Indiana. Marsha is preceded in death by both of her parents; her husband, Clyde Ted Marshall; and one sister, Linda Tanner.

Marsha was a 1958 graduate of Arsenal Tech High School in Indianapolis. She was an Executive Assistant to General Council for Best Lock Corporation Indianapolis for 24 years. She also worked in the family business at Haltom equipment for 23 years. Marsha was a member of East 91st Street Christian Church in Indianapolis. Marsha would volunteer many hours at the Midwest Food Bank and traveled with Christian Friends of Israel. She was very faithful. Marsha was always helpful to family and everyone.

Family and friends may show their love and support from 4 to 8 pm on Monday, June 15th at Jones Family Mortuary in Mooresville. A private graveside service will be held at 12 noon on Tuesday, June 16th at First Marion Baptist Church Cemetery in Commiskey, Indiana, where Marsha will be laid to rest.

In lieu of flowers, memorial contributions may be made in Marsha's memory to the Midwest Food Bank, 6450 S Belmont Ave, Indianapolis, IN 46217.

To send a condolence to the family or to share a story about Marsha, please visit: www.jonesfamilymortuary.com