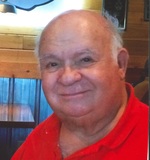 Louis Linder Jr., 82, of Camby, Indiana passed away on Tuesday, September 22nd with his family by his side. Louis was a life long resident of Camby. He was born on December 31st, 1937 to Louis Sr. and Irene (Georgeff) Linder.

Louie, or "Son", as he was known to many, never knew a stranger. He might not remember your name, but he would remember you and always had a smile and a story.

Louie was a 1956 graduate of Decatur Central High School and served in the National Guard after graduation. Later, he and his father started an Acoustical Contracting business, Louis Linder and Son, which was located in Camby. They were in business for more than 45 years. He attended Camby Community Church and was a former Sunday school teacher at Friendswood Baptist Church.

Louie was preceded in death by his parents, Louis and Irene Linder; his nephew, Mark Chasteen and Mark's children, Misty, Steven and Mark. He is survived by two sisters, Shirley Chasteen and Dixie Spragg; one brother, Jimmy (Valerie) Linder; nephew, Tom (Chris) Spragg and nieces, Cathy (Warren) Goodman and Christy (John) Arevalo; Renie (Bruce) Batten, Rhonda (Joe) Huberts, Brittney (Jay) Hart and Brooke Linder. He is also survived by many great and great-great nieces and nephews who loved him dearly.

In lieu of flowers, donations can be made to Camby Community Church or Friendswood Baptist Church. Mail to: In care of Louis Linder Jr. PO Box 51, Camby, IN 46113.

Our family would like to thank Melvin and Marilyn McClellan for always being there to help Louie and our family. His caretakers, who if not for them, we would not have been able to keep Louie at home- Julie Stanley, Randy Pope and Adrianne Wraley; The staff of Regions Bank at the Valley Mills and Mooresville branches who looked after him like family; The Camby Post Office clerks and carriers; Michael Corcoran of MJ Schuetz and all the waiters, waitresses and friends he made at Bob Evans, Gray Brothers Cafeteria, Cracker Barrel, Shapiro's and China Gardens just to name a few.

Louie will be missed by his friends and family alike.