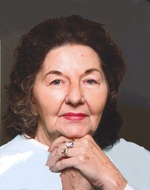 Loretta L (Johnson) Taylor, 84, of Mooresville, passed away Friday, June 12th, 2020. She was born May 14th, 1936 in Connersville to her parents, Ralph and Velma (Boone) Johnson. She married Roy Thomas "Tom" Taylor in 1956. She was a resident of Indianapolis for most of her life.

Loretta is survived by her three children: Betty Eddy of Indianapolis, Michael (Cheryl) Taylor of Martinsville, and Kevin Taylor of Indianapolis; five grandchildren; several great grandchildren and a great-great grand son; and one brother: Jed Johnson of Connersville. Loretta is preceded in death by both of her parents; her husband, Roy Thomas "Tom" Taylor; a son Terry Taylor; and three brothers: Louie Johnson, Herschel Johnson and Bill Johnson.

Loretta was a 1954 graduate of Connersville High School. She later worked as a Secretary-Treasurer for CMI in Indianapolis for 50 years before retiring in 2002. She enjoyed Crocheting and word search books.

To send a condolence to the family or to share a story about Loretta, please visit: www.jonesfamilymortuary.com