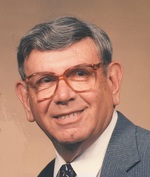 Lee E. McClellan, 98, of Avon, passed away Monday, October 26th, 2020. He was born December 28th, 1921 in Indianapolis to his parents Jesse and Dolly (Aishe) McClellan. He married Pearl (Shafer) McClellan on February 29th, 1940. He was a resident of Indianapolis for most of his life.

Lee was a WWII veteran that served in the U.S. Navy. He later on worked as a Assistant to the Senior Engineer for IPALCO for 36 years before retiring in 1984. He was a member of Life Line Baptist Church. Lee loved Gospel music and played the bass guitar. He spent 10 years with the Glory Land Singers.

Pastor Tim Lindsey will officiate a Graveside service at 11 am on Friday, October 30th at West Newton Cemetery in West Newton where Lee will be laid to rest.

In lieu of flowers memorial contributions may be made in Lee's memory to the Alzheimer's Association, 50 E 91st St #100, Indianapolis, IN 46240.

To send a condolence to the family or to share a story about Lee, please visit: www.jonesfamilymortuary.com