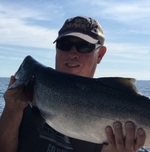 Larry G "Bucky" Stinson, 67, of Mooresville, Indiana passed away Thursday, October 29th, 2020. He was born March 31st, 1953 in Richlands, Virginia to his parents, Dewey "Patton" and Doris Lee (Arnold) Stinson, where he spent his early childhood. He married Teresa A. (Weintraut) Stinson on July 6th, 1998. He lived most of his life in Indianapolis, but was a current resident of Mooresville since 1996.

Larry attended Wood High School in Indianapolis. He worked as a Metal Finisher for GM for 39 years before retiring in 2011. He was a member of U.A.W. Local #933. Larry loved fishing, camping and boating. He also enjoyed collecting cars. He was a great story teller, jokester, and friend to everyone. He had a special place in his heart for his canine son, Bandit and his other canine granddaughter, Sissy.