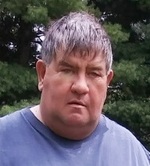 Larry attended Plainfield High School in Plainfield. He was an over the road Truck Driver all of his life, but for the past year worked for V.T.I. Trucking in Indianapolis. Larry loved fishing and spending time with his brother, sister in-law and his mother. He would help absolutely anyone and was a giver to all of anything. Larry was a member of American Legion Post #64.

Family and friends may show their love and support from 4 to 8 pm on Tuesday, June 30th and from 10 to 11 am on Wednesday, July 1st at Jones Family Mortuary in Mooresville. Edward Hunter will officiate a celebration of life service at 11 am on Wednesday, July 1st at the funeral home. Larry will be laid to rest at Fairfield Cemetery in Camby next to his father, Larry W. Philpott Sr.

Memorial contributions may be made in Larry's memory to the family fund, c/o Chris Philpott Jr, 3502 Bowen Place, Indianapolis, IN 46221.