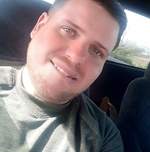 Jody Lee Sizemore II, 34, of Paragon, passed away Monday, September 21st, 2020. He was born August 13th, 1986 in Indianapolis to his parents, Jody Lee Sizemore Sr and Virginia (Allbright) Martin. Jody was a resident of Paragon for most of his life.

Jody was a 2005 graduate of Eminence High School. He was a laborer and a hard worker. He most recently worked at Chewy as a forklift operator for the past six months. Jody was a volunteer at the Brooklyn Fire Department as well as Harbor Lights Ministry- Salvation Army. He loved spending time with his family, especially his uncle Tommy and Gene fixing things and helping around the house and property. He had a passion for music and loved to play guitar with his grandma, uncle, brother and cousins. He enjoyed being around all of his cousins, nieces and nephews as well as watching his pride and joy, his son Caden, play with all of his cousins like he did when he was younger. His smile was contagious and as always was there to lend a hand. Jody gave the biggest hugs.

Family and friends may show their love and support from 1 to 4 pm on Sunday, September 27th at Jones Family Mortuary in Mooresville. Pastor Jacob Turner, Jody's cousin will officiate a celebration of life service to follow at 4 pm at the funeral home. Cremation arrangements have been entrusted to Jones Family Mortuary in Mooresville. Jody will later be laid to rest in Mannan Cemetery in Quincy, Indiana.

In lieu of flowers, memorial contributions may be made in Jody's memory to help with funeral expenses to Jones Family Mortuary, 4165 East Allison Road, Mooresville, IN 46158 or to the families GoFundMe page,
https://www.gofundme.com/f/funeral-expenses-for-jody-lee-sizemore-ii?utm_source=customer&utm_medium=copy_link&utm_campaign=p_cf+share-flow-1

To send a condolence to the family or to share a story about Jody, please visit: www.jonesfamilymortuary.com