To share your memory on the wall of Jessie Gentry, sign in using one of the following options:

Jessie was a 1954 graduate of Monrovia High School and later went on to join the Army before discharging in 1964. He worked for Black and Decker as a Senior Tool Repairman for 43 years before retiring in 1998. Jessie was a member of Eternal Life Baptist Church in Mooresville. He enjoyed gardening and coon hunting. Jessie was also an avid Nascar enthusiast.

Due to the current unprecedented guidelines limiting public gatherings, there will be a private visitation with a private service officiated by Pastor Gary Fox II to follow at Jones Family Mortuary in Mooresville. Jessie will be laid to rest at Mt. Pleasant Cemetery at Hall.

To send a condolence to the family or to share a story about Jessie, please visit: www.jonesfamilymortuary.com
Read Less

To send flowers to the family or plant a tree in memory of Jessie Gentry, please visit our Heartfelt Sympathies Store.

Receive notifications about information and event scheduling for Jessie

We encourage you to share your most beloved memories of Jessie here, so that the family and other loved ones can always see it. You can upload cherished photographs, or share your favorite stories, and can even comment on those shared by others.

Posted May 17, 2020 at 08:56am
Carolyn , sorry to learn of Jesse's passing. Know our prayers are with you and the family.
David and Lois Renner
Comment Share
Share via:
DG

Posted May 11, 2020 at 03:26pm
Greg and Family , I am sorry to hear about your Dad, it sounds like he was a hard working man. I see where you get it from. Let me know if you need anything.
Dave Grant
Comment Share
Share via:
MA

Posted May 11, 2020 at 10:14am
Our thoughts and prayers are with your family. May you find peace and comfort through this difficult time.

Posted May 09, 2020 at 05:18pm
Carolyn, I am so sorry for your loss. I remember all of you from when our daughters were in school and played softball. Hope you are doing well. Susan Buck
Comment Share
Share via:
JG 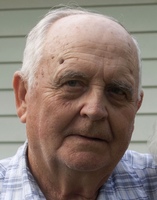