To share your memory on the wall of Herbert “Ted” Clements, sign in using one of the following options:

Ted was a 1948 graduate of Thomas Carr Howe High School and later went on to serve in the Army during the Korean War, stationed in Alaska. He worked for the post office as a postal clerk for 35 years before retiring in 1988. He was known as "Klondike" by his colleagues. He was the owner/operator of Depot Liquors in Indianapolis with his family. Ted was a member of the American Legion Post #88, as well as a life long member of Our Lady of Lourdes. Ted was an avid sports enthusiast, he especially enjoyed watching baseball, hockey and golf.

Family and friends may show their love and support during a Memorial Mass officiated by Father Rick Ginther on September 12th, 2020 at 2 pm held at Our Lady of Lourdes Catholic Church, 5333 E. Washington Street, Indianapolis, IN 46219. Arrangements were entrusted to Jones Family Mortuary in Mooresville.

To send a condolence to the family or to share a story about Ted, please visit: www.jonesfamilymortuary.com
Read Less

To send flowers to the family or plant a tree in memory of Herbert “Ted” Clements, please visit our Heartfelt Sympathies Store.

We encourage you to share your most beloved memories of Herbert “Ted” Clements here, so that the family and other loved ones can always see it. You can upload cherished photographs, or share your favorite stories, and can even comment on those shared by others.

Posted May 08, 2020 at 03:23pm
Barbara I'm so sorry for your loss.We became friends at Cathrines house while having tea .My thoughts and prayers are with youand your son and daughter. Love and hugs Barbara Wickersham
Comment Share
Share via:
MD

Posted May 08, 2020 at 12:25pm
Prayers go out to Ted and his family. I am in the same Red Hats Chapter as Ted's wife Barb, and I want her to know that we are there for his in her time of grief. Mary Daniels
Comment Share
Share via:
D

Posted May 05, 2020 at 08:30am
I always enjoyed seeing Ted come to Pleasant Run Golf Course on a daily basis. He would walk over and and chat with the many golfers that he knew. He never played a round of golf but he loved the game of golf and the stories behind golf. Later in life he wasn't able to walk over and see us, we missed him. He would sneak in a coneydog ever now and then even though he had lost a lot of weight. His son Ted took up the game and we enjoy seeing him come to PR with his buddies. He was a Good Man.

Posted May 02, 2020 at 11:14pm
So long Ted. We all benefitted from the time you were able to spend with us. Thank you for your kindness. Have a good journey.

Posted May 02, 2020 at 10:35pm
I'm so sorry for your loss, I remember Ted as always
being very nice and had a good sense of humor.
Tricia Haynes
Comment Share
Share via: 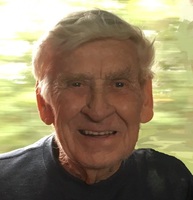