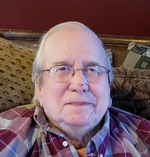 Forest Eugene "Gene" Riddle was born in Haleyville, Alabama. He served in the Air Force during the Korean War. In 1957 he married the love of his life, Nelta Norris, who preceded him in death in 2008. They lived briefly in Chicago, then moved to Alabama. Their daughter was born in 1958, the first grandchild on both family sides. In 1960 they moved to Indiana where he and his family stayed until the 1990s. He was the leader of a children's group The Royal Rangers, at his church First Assembly Of God in Franklin, Indiana for several years. Gene retired from RCA RECORDS in Indianapolis. He was always such a hard working man, so he then took a job at Nissan in Smyrna, Tennessee for another 5 or 6 years.

His whole life was centered around Christ and family. Gene was a very humble, loving, giving and patient man.
He and Nelta returned to Alabama in latter years. Gene enjoyed returning to Indiana periodically and was with his daughter and caregiver who he called "Cyndi", until his death. He is now home, with the love of his life and Christ. Free from all pain and disease.