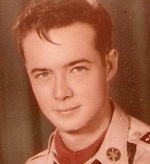 Eldon Gerald "Jerry" Staggs, 78, of Franklin, passed away Monday, June 1st, 2020. He was born May 5th, 1942 in Greencastle to his parents, Eldon Staggs and Mildred Christine (White) Hazelwood. He was a resident of Mooresville since 1994 and previously grew up in Clinton Falls.

Jerry joined the Army in 1960 and later worked as a Crossing Guard for schools. He was a Truck Driver who drove coast to coast. He worked in a ware house for Daner's in Indianapolis as well as worked security for the race track and the Hoosier Dome. Jerry was a member of Teamsters Local. He was a spiritual man. Jerry enjoyed crossword puzzles and was an avid sports fan, especially football and the Steelers and Texas A&M.

To send a condolence to the family or to share a story about Jerry, please visit: www.jonesfamilymortuary.com