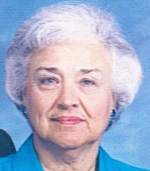 Edna was a 1950 graduate of Arsenal Technical High School. Although she was a proud homemaker she also worked for the U.S. Census Bureau as an interviewer for 25 years. She was a member of Grace Church. In her spare time she enjoyed arts, crafts, sewing and bicycling.

Edna is preceded in death by her parents; husband; and three sisters: Veva Anne Kuhn, Ruth Baugh, and Alice Hylton.

To share a favorite story about Edna or to send an online condolence, please visit www.jonesfamilymortuary.com