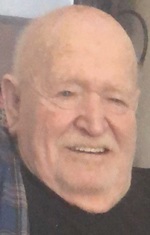 Billy Gene Clark, 93, of Camby, passed away peacefully at home on July 12, 2019 with his loving family by his side. He was born to Fred B. and Juanita B. (Long) Clark on July 6, 1926 in Avon. He was in the 1944 Decatur Central High School class. He served honorably in the United States Army during World War II. He married Mildred Lucile (Owens) Clark on April 29, 1950.

Billy was a Truck Driver for Wake Up Oil in Indianapolis for 37 years, retiring in 1995. He also drove a school bus for Decatur Township Schools for 10 years and drove a truck for Louis Linder & Son. He tilled gardens for many people in Camby for years. He was a member of Fairfield Friends Meeting and a 50 year member of West Newton Masonic Lodge. He was a hard worker and strong family man.

To send a condolence to the family or share a story about Billy, please visit: www.jonesfamilymortuary.com